In Italian a cappella translates to ‘in the manner of the chapel’ and while church choirs are often accompanied by the resounding presence of the church organ, in the broader artistic sense an a cappella group perform with their voices as the sole instrument.

Serotonin is Griffith University’s resident a cappella group. Established just 6 years ago the group already has an esteemed history, including performances at New York’s Carnegie Hall and winning the national title at the Australian A Cappella Championship.

Most recently they performed at the Chengdu International Youth Music Festival in China, with eight members of the twenty strong group accorded the honour of singing at the festival’s opening ceremony. As Chengdu and the Gold Coast enjoy a sister city relationship it’s the kind of cultural exchange that forges stronger ties between the two cities.

It was the first time Serotonin had performed at the festival and the group’s President Laura Suttle said they were overawed by the experience. “In all honesty we never expected to be asked to sing at the opening ceremony, but the Chinese aren’t familiar with the a cappella style of singing, so there was a lot of interest in our performance.”

Fellow group member Bill Carrett was equally enthusiastic about participating in the festival. “We were very popular with the crowds there because we were so different. Playing the opening ceremony was fantastic. Our group had never played on a stage like that before. There were big LED screens behind us playing footage of the Gold Coast as we sang.”

While it was a smaller version of Serotonin performing at the festival both Bill and Laura agree that it worked to the group’s advantage.

“The bigger the group, the more complex it is to perform, not just vocally, but our choreographed moves as well, it’s much easier to hit the mark with a smaller group. With eight of us performing it was really the perfect size for the stage and the audience,” says Bill. 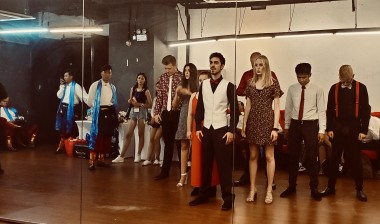 Serotonin rehearse backstage at the festival

During the festival Serotonin also performed in a small concert hall which impressed Bill in particular. “It had wonderful acoustics and was surprisingly intimate even though it was a grand space.”

One of the bonuses of taking part in the festival was that the Griffith students had time to build friendships with many of the other musicians involved. “We made a real connection with the other groups from around the world. We all stayed in the same hotel - it was a fabulous experience. Music is the universal language,” says Laura.

Those friendships have continued to strengthen after the festival thanks to social media, but nothing can beat the shared experience of such a culturally diverse music festival. Serotonin are already thinking about next year’s event and Bill Carrett is already excited by that prospect. “We’d jump at the chance to do it again,” he says.

Serotonin will be performing a showcase concert on the Gold Coast in November. You can follow the group on their Facebook page here.